What's up with all the talk of a slow economy?  Apparently the people who are shopping at my local Wa-Mart haven't gotten that word.

Wal-Mart is always filled with … shall we say, colorful characters.  But this Christmas season it seems especially interesting.  I've tried to do the bulk of my shopping elsewhere, but there are some things I can only find at Wal-Mart.

I stopped by the other day with the thoughts “mid week, and middle of the day, less shoppers.”  Oh, I was so sadly mistaken.  My first clue should have been the overly full parking lot, but I'm the eternal optimist and thought “oh, it won't be THAT busy.”  Busy was the least of my problems.  Here are a few of things I ran into:

Electric shopping cart riders — they were everywhere.  I had no clue the store had that many electric carts.  Let me tell you, those little carts can move.  I had to jump out of the way more than once.

And then there the  teams.  I think there may have been some sort of contest or club initiation going on (although most of the riders were well beyond college age). The teams shopped  shopped side by side and blocked the ENTIRE aisle.  I got caught behind one of these tag team electric cart duos.  I didn't want to appear rude to those who have a physical disability, so I just crawled along behind them thanking the Lord that I could get around so well.    Husband and wife (at least I think they were married, they certainly bickered like it) discussed every minutae detail of each purchase.  And then I watched something wondrous occur.

And what to her wondering eyes should appear, but the bargain of the day, sadly a crowd blocked her way.

With a twinkle in her eye, and dollar signs in her head, She leapt from her cart , raced down the aisle, vaulted over a display, and snagged her great bargain.

A miracle? I just can't say, but a amazing sight to behold nonetheless. A healing from the heavens or the powers of a bargain made this feeble woman walk, and even run.

Certainly, this fleet-footed shopper never intended to fake her infirmaries  and surely she was caught up in the Christmas joy that she became a miracle at the Wal-Mart.

Or she was just faking it! You choose.

Wild at Wal-Mall and that was just one couple, you should have seen the lady with the bad Lily Munster hair (and for those who don't remember Lily Munster here's a photo) 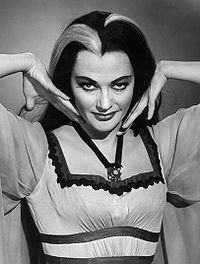 Now picture short, but standing straight out (not up, think out) on either side.  It looked like some strange reciever of some sort.  I did a double take, then realized and try to be all cool, like I wasn't looking.  Come on, this lady has hand that stands 6 inches out on either side and is striped like a skunk.  I love me some big ol' County Music star hair, but this was in a different place all together.

There were many more like the lady who drove off in her electric cart while it was still plugged in and charging — she never noticed until the greeter chased her down.  And there was the….. oh, I could go on and on.

I'd hoped to leave you with some great words of wisdom, but I have none today.  Just watch out for those electric cart drivers, they're a tough bunch this time of year.