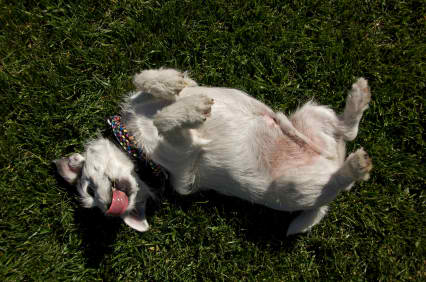 My dog has a passion — for smelling bad.

His passion is at its' height immediately following a bath.  After his outside bathing experience, I walk him around so he can shake, shake and then shake some more.  He's good with the shaking, but what he really wants to do is ROLL. He's clean, smelling so good and he is pulling and tugging to get his head down and roll around.  And if it smells horrific, he wants it all the more.

I don't know if he loves smelling bad or if he just has a passion for rolling around in stinky stuff.    Either way the result is the same — he stinks. Some dogs do tricks, other dogs answer when you call them, my dog stinks — it's his gift .  (Wonder if that would get us on David Letterman?  Guess we'll just have to wait for the invention of Smellevision – and that's a post for a different day.)

He has a passion for smelling bad.  He goes after it with a vengeance.  Doesn't matter how many times he gets a bath, he'll find the bad smell and roll around in it.

I want that kind of passion — not for smelly stuff, but for God stuff.  I want to chase after Him with all I am.  I want to find God in everything around me because I know He's there. Scripture tells me  “He is before all things, and in Him all things hold together” Col 1:17.  I want to roll around in all the God stuff that surrounds me.  I want to cover myself with His aroma.

Some days I do find God in all around me and other days I just roll around in smelly stuff that doesn't glorify Him in any way.

What is your passion?  Are you rolling around in it?