Salamander in my sink

I just wanted some tea.  I didn’t see him… her?  at first.  I grabbed a glass and look down.  Oh my – there he, she, it, whatever — there it was.  Relaxing in my sink.  I jumped back five feet – and would’ve jumped farther if I had a bigger kitchen, but let's just move on.  I crept toward the sink on tiptoes and don’t ask why I was on my tiptoes maybe it’s so I look even bigger to the 3 oz thing in my sink.

Lizard?  I can handle lizards.  Really they aren’t a big deal.  I can manage a little lizard.  But I wasn’t sure about this one – he wasn’t the standard issue green.  He had two yellowish stripes down his dark gray body.  Was he trying to match the stainless sink? I don’t know, but I didn’t trust him.  Never trust a dark colored lizard thing, that’s my motto.  Okay, it’s not my motto but is was in that moment.

I was stuck.  I couldn’t leave him (apparently I’ve now decided that it is a he) in my sink.  What if he escaped?  What would happen?  Madness I tell you, madness! I just can't live in a house with an identified species of the lizard family roaming free.

The CAT!  Yes, the cat loves to catch lizard things.  So off I go to round up MK (short for Mole Killer) 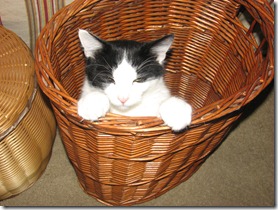 But MK wasn’t intrigued with him since he refused to move and just sat there holding my sink hostage.  Kitty just made his way back to the basket he's now declared his new napping spot.

I moved on to strategy two – find the longest utensil I own and see if I can get him out of the sink and maybe then MK will be interested.

AND that’s when I found out – it’s a SALAMANDER!  Lizards I can handle, but salamanders…. NO WAY!  They slither like snakes on legs.  It’s the wiggly way that just makes my skin crawl.

After squealing, jumping back and shaking my hands in the icky dance, I realized I had two choices – get rid of the salamander or give up my sink (and my kitchen).  I decided to tackle the problem head on.  I went after him again with my barbecue forky thing and noticed that he was barely moving.  Seems Mr. Salamander was exhausted from trying to get out of my sink.

After much thought, finagling, a large plastic container with a lid, and my trusty barbecue forky thing I was able to get him out of my sink and back into my yard.  The salamander lovers of the world should give me some type of rescue badge or possibly a  valium to calm my nerves.

I thought about the messes I’ve gotten myself in – well, I’ve never been stuck in the bottom of a stainless steel sink, but you get my point.  Messes that I couldn’t work my way out of and I finally just gave up and waited for rescue.

He drew me up from the pit of destruction, out of the miry bog, and set my feet upon a rock, making my steps secure. (Ps 40:2 ESV)

I’ve been stuck in that pit of self destruction – and I tried desperately to claw my way out, but I couldn't. Like the salamander I was stuck and exhausted — and I just waited.  I waited on my Lord to lean down from on high and pull me up.  And He did.

I’m so blessed by Him.

What about you?  Ever been like a salamander in a sink?