Me and Sarah Palin, VP-to-be, BFF? Vice Presidential candidate, Sarah Palin, rocks.  There’s really no other way to say it.  I like her.  I definitely think we could be BFFs.

She wears kickin’ red pumps – which means she’s serious, but she still has that fashion sense.  Hang onto that Sarah – government can really take it out of you.

Seriously, how many well-dressed female politicians can you name?  I can’t think of one. 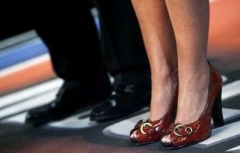 Along with wearing her cool red kicks, Sarah has her picture taken on the couch sitting on a bear.  A dead one, not a live one.

This alone is gutsy move.  Probably more gutsy than if she sat on the live bear. 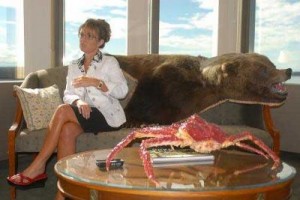 I’m sure  some bear hugging PETA bunch somewhere is whining about the bear.

I say we let PETA people have the bears – but they can’t put them in cages or enclosures, that would be cruel.  I say we just give them some little island we’re not using and they can keep themselves and the bears on there.  We’ll drop food in from time to time.

Something tells me that the bears will find something to eat.  The PETA people on the other hand can just suck on rocks and chew up grass.

Did you hear her speech at the Convention? She got rid of the ridiculous spending.  The private chef and the private jet – “I sold it on ebay.”  What a great comment – and just another thing that proves that we could be BFFs.  She knows that ebay is a useful tool for fun and function.

I can just hear her talking to McCain, “now, Mr. President, do we really need 10 big gas guzzling SUVs each? Couldn’t we have the Secret Service guys double up?”  Just think what those would bring on Ebay.

Sarah Palin is the breath of fresh air for America.  She’s not connected to anyone.  Her Dad isn’t a former Senator or lobbyist.  Her mother doesn’t own a newspaper, a chain of hotels or a television studio.

She is non-Washington DC.  She’s just one of us.

She’s a Mom who wanted to make a difference – that desire for change (real change not the stuff that Obama talks about) has taken her from city council to Vice Presidential candidate.

Sarah Palin is the hope for the conservatives.  She embodies what we believe in and she delivers her message with grace and humor.  She’s exciting, interesting, intriguing, and fun to watch.  She looks like the person you want to hang out with.  She looks like someone who laughs easily and often.