A Princess, a Sash, and a Serious Cold 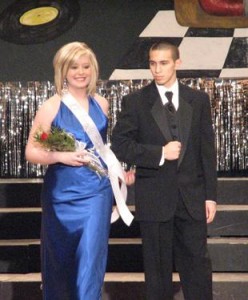 Ahh, what a weekend!  It's the annual Ms. Tomahawk Pageant! (The name is a bit misleading according to the young son of my friend, Jennifer — he annouced to her, after seeing the pageant at school, that they were NO tomahawks in that thing!)

The big school pageant is serious business here in small town Alabama — none of that walk-across-a-stage-and-pick-the-most-popular-girls stuff for us.  This is like big girl pageants — we have judges from outside of our area who don't know us or the girls, there's a huge opening and closing, and each grade dances and then there are the guys!  They are the best — entertaining and funny.  Everyone loves the guys.

When Paige began her pageant trek I only asked one thing — let's make it fun.  And we do.  We don't stress, well Paige and I don't, but Charity, she loves to stress and if there's nothing to stress about, she'll make something up.

My little princess (if this 5'8″ beauty can be called a little princess) LOVES the pageant — but not as much as her older sister, but more on that in a moment.

Now, let me add this little pageant disclaimer — we are not pageant people (and that's not a bash at the pageant folk of this world, we're just into the whole pageant thing).

Paige was in her first pageant three years ago and she is only interested in her school pageant and nothing else.  She just loves buying the dress, learning the dances and hanging out with her friends.

As much as Paige loves it, her older, 22 year old sister loves it even more.  And this is the child who refused to be in the school pageant during her high school days.  But she is the hair and makeup wizard and now, lover of all things pageant (at least the one her sister is in).

Paige looked gorgeous, but the weekend was full of malfunctions.  Her dance shoe broke, but ever the level headed thinker, she worked out borrowing another dancer's shoes – -the other dancer performed with a different group.

There was the wayward pageant girl earring (which are huge sparkling things).  Paige asked a girlfriend to find it for her — and she did.  Thank you, Alyssa!!

There was the costume issues, water spot on the bottom of the dress and more, I'm sure.

Nothing fazes Paige, she just rolls right through it.  Her sister panics  and me, I usually make some huge boo boo — like the year I burnt a hole in the chiffon of her dress. Don't think ahh, she burnt the underneath chiffon — NOPE, I burnt a big ol' hole right in the side of the dress.   In case you didn't know, the steam that comes out of an iron is a whole lot hotter (hot enough to melt chiffon, apparently) than the steam that comes out of a steamer.  Lesson learned.  I don't get within 20 feet of the dress with an iron.  Back to the hole in dress, let's just say Praise the Lord that my Mom is a wicked seamstress.  She made it work, amazing, I know!

But now she has a sash in hand which apparently carries more weight than a mother's determination.   I lvoe that the pageant is scored equally on the interview and on the performance that evening.  It's not all about looks and pretty dresses, it's about how well you can talk, carry on a conversation, and present yourself.

Now, I have this wicked cold, but at least it held off through most of Saturday night, but not even major sneezing, sniffles, aches and pains can keep me from posting this one!  She is too cute and also such a blessing to us.  She's smart, witty, generous, loves the Lord and is a joy to be around — at least most of the time (then there's the messy room, the smart remarks, the arched eyebrow, the spider for a pet… but let's focus only on the good qualities for this post…. )

Here's the fun — all the pictures.  Well, not all, according to Paige I took 250 pictures.  I think I showed appropriate restraint. 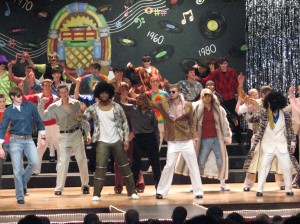 The Guys!  They are so great!  And funny! This year we had tuxes and top hats, back flipping men in black, the Village People, and the 1970s brought back in full glory.  It was hilarious. 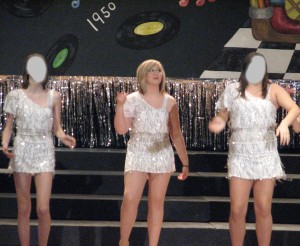 The mad dancing skills of the tenth grade (and I didn't have permission from Moms to put these others on my blog, so that's why they are the unknown dancers)

It has a train – a zebra train.  It's the perfect look for her! With her sassy face. 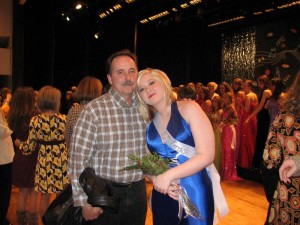 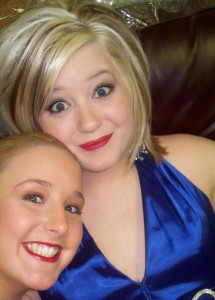 Being her silly self!